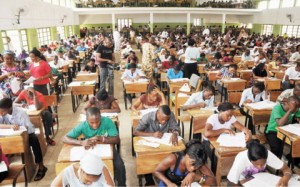 The West Africa Examinations Council (WAEC) has threatened to withhold the results of thousands of students from 19 states who  participated in the May/June 2015 WASSCE over non-payment of candidates’ registration fees by their state governments.

“The affected states should off-set the registration fees of their candidates as soon as possible, as we cannot guarantee that the results of their candidates for the May/June 2015 WASSCE will be released alongside others,” Mr Charles Eguridu, Head of National Office, HNO,  said at the council’s national office Yaba, yesterday.

According to him, a total of 19 states in the country are owing the Council due to the entry fees for states government-sponsored candidates for the May/June 2015 WASSCE. Sadly, the states have been nonchalant towards payment of the debt which amount to  N4  billion.

While he declined to name the indebted states, Eguridu urged them to pay up within the next two weeks or risk not seeing the results of students from their states.

“Many of the states of the federation, as part of their education policy, pay the registration fees of candidates for the WASSCE, particularly in the public schools.

“This is quite commendable as it afforded many indigent students the opportunity to sit for examinations and relieved many poor parents of this financial burden.

“As I speak to you now, we are cash-strapped as a result of the delay in off-setting the registration fees owed the Council by some states. As a result, we are finding it difficult to meet our financial obligations, particularly to our supervisors, examiners and service providers.”

“We have written to the affected states governments without any response. The poor response is threatening the smooth operations of the Council,” Eguridu said.