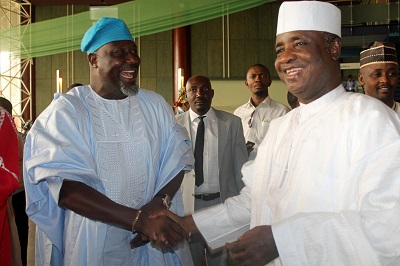 The immediate past Governor of Sokoto State, Senator Aliyu Magatakarda Wamakko has expressed optimism that the leadership crisis rocking the Senate will soon be a thing of the past.
Wamakko said Senators had been talking and considering the necessity of working together in the overall interest of peace and progress of Nigeria, rather than continue to bicker over group or personal interests.
The former governor, who made this known yesterday while speaking to journalists, said the impression of rumbling among the Senators had always been the creation of the media, stressing that Senators were elected by their different constituencies not to fight, but to legislate for good governance and promotion of democracy.
According to Wamakko, there had been neutral bodies among Senators, who continued to mediate for amicable resolution among contending forces, outside the media spotlight. He added that by the time the Senate resumes sitting on Tuesday, July 28, members would be seen to be working together.
“We are not for crass politics as you in the media have been suggesting. We are for progress of Nigeria, sustenance of democracy and the success of the government of President Muhammadu Buhari. We were elected to do this and not to bicker”, he said.
According to Wamakko, everybody had agreed to work together to gain time lost while the Senate face the serious business of legislating well for Nigeria.
“I understand that the issues of the past few weeks since we resumed is about politics. It happens in every clime. But what I want to suggest is that the media should understand the situation and offer assistance by reporting issues objectively”, he noted.
The ex-governor further noted that building democracy is not the sole responsibility of President Buhari, Senate President Bukola Saraki or the governors alone but a collective responsibility, which also involves the media.
Wamakko pointed out that the 8th Senate too is not insulated from crisis being part of what he described as a natural process of growth in democracy but appealed to his colleagues who may be nursing some form of grievances on the issues at stake in the Senate to let bygone be bygones.