Home Politics What Yar’Adua Told Me When I Confronted Him On Reversal Of Sale...
Facebook
Twitter
WhatsApp 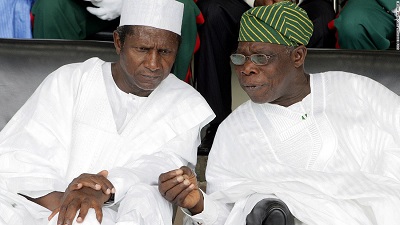 Former President Olusegun Obasanjo has castigated his successor in office, late President Umar Musa Yar’Adua for reversing the sale of the Kaduna and Port Harcourt refineries to a Dangote-led consortium by his administration.

The late president made the cancellation of the privatization of the moribund refineries one of the first things he did immediately he took over power from Obasanjo.

In the second part of an interview he granted Channels TV on Wednesday, Obasanjo, who is speaking publicly on the issue for the first time, accused Yar’Adua of bowing to pressure by some unnamed persons by canceling the said contract.

The ex-president, while justifying some of the claims he made in his controversial three-volume autobiography, My Watch, spoke about his efforts to get people to invest in the oil sector and how the country eventually secured buyers for two of its four refineries.

He said, “Eventually Aliko Dangote led a group that paid $750m for the privatisation of two of the refineries – 51 per cent privatisation – and my successor (Yar’Adua) came (in), he turned it down. In fact, he paid back the money because they (investors) had paid the money.

“And I went to him; I said ‘look, do you know…? And he said well, he did it because of pressure. I said ‘pressure?’, so to you what matters is pressure, not what is in the best interest of Nigerians. I said, but you know it will not work. Then I said in 10 years, if you continue, you would have spent two times the amount that these people had paid and it still would not work. And that is what happened.

“Today those two refineries, you can never make them work. And if we are going to sell them, we would be lucky to get $250m out of them because they have become a huge scrap. Now, why shouldn’t I explain that (in my book)?”