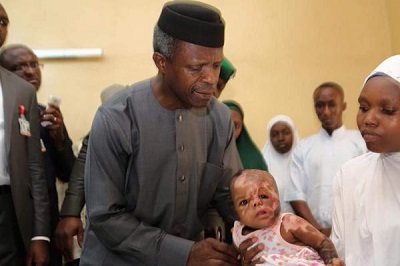 Vice President Yemi Osinbajo has declared the Federal Government’s readiness to resettle those displaced by the Boko Haram insurgency in the North-East part of Nigeria.

The vice president, who was in Maiduguri, the Borno State capital, currently home to about 1.5 million internally displaced persons on Wednesday, stressed that the essence of government was to provide security and good welfare for the people.

He disclosed that he was in Maiduguri to see to the welfare of the displaced persons.

Osinbajo, who spoke to journalists after a tour of Dalori camp – one of the 22 IDP camps, University of Maiduguri Teaching Hospital and the palace of the Shehu of Borno, said the tour was an eye-opener as it has given him more knowledge on how to handle the issues concerning the IDPs and related issues.

He said he had been briefed by stakeholders in the issues surrounding the IDPs and commended the efforts of the National Emergency Management Agency and the Borno State Government for bringing succour to the displaced persons.

He said that the Federal Government was ready to assist the IDPs back to their feet after they might have been resettled.

Earlier at the IDP camp, the vice president said he was in Maiduguri on the instructions of President Buhari to see to their well-being.

He said, “I am here in Borno State, and in particular, in this camp on the specific instructions of the President, His Excellency Muhammadu Buhari, who out of great concern for the well-being and the welfare of men, children and women in this camp, sent me.

“He has asked me to come to join the governor and see for myself what exactly is going on in the IDP camps, not just in Borno but in Yobe and Adamawa states which have been affected by the Boko Haram insurgency.

“The President is extremely concerned, especially about the welfare of women and children and other displaced persons, and in particular, those who are here in Borno State.

“He wanted me to go round and even have some conversation today with the displaced persons who are in this camp”.

He added, “From the report and from the brief interaction that I have had, it is quite clear that there has been a great human suffering and extreme trauma.

“But the governor of Borno State has been working extremely and beautifully in making sure the entire trauma and hardships are greatly reduced”.

Osinbajo continued: “The President wants me to tell Governor Shettima specifically that he is extremely pleased by the hard work he has done; that he is aware that the governor has been trying to ensure the comfort and safety of the people who are in this camp, and of course, the entire people of Borno State.

“This is an overwhelming task he has rendered; a tremendous service, not just for his people but for the entire populace of this country.

“The Federal Government of Nigeria stands ready to play our part in leading the effort that would ensure that the people of the state and the people of the North, who have been traumatized and displaced, are not left to suffer for much longer.

“This is the reason why I am here today in order to assess first-hand some of those things that have been done and what needs to be done”.