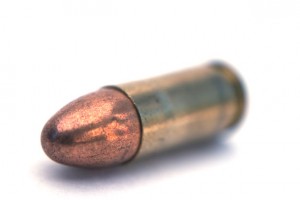 A DeLand, Fla., woman said she thought she had been hit by an errant firecracker while dining with her friends on July 4th, but days later she visited a doctor who found a bullet embedded in her leg. UPI reports:

Heather Charlebois was just sitting down at a cafe late Saturday night when she felt a sting on her leg. She and her boyfriend cleaned up her wound in the restaurant’s bathroom, but not seeing any blood, they figured she must have been burnt by a firecracker.

“My first thought was somebody hit me, slapped me open handed really hard on my leg and pinched me, but it did not make any sense because I didn’t see anyone,” Charlebois told The Daytona Beach News-Journal. Four days later, when the pain still hadn’t gone away, she visited a doctor, who ordered an X-ray and found a .38-caliber bullet embedded about 4 centimeters into her thigh, she told WESH-TV in Orlando, Fla.

DeLand police are now trying to figure out who shot the bullet. “Well, it’s safe to say that at the moment we don’t know where it came from,” said DeLand police Sgt. Chris Estes. “There is no indication a gun was fired in close proximity to where she was sitting at this point so, another theory is that it was fired into the air from a distance.” In the meantime, doctors say the bullet is too close to a major artery in Charlebois’ leg, so they’re leaving it where it is. “I feel very fortunate,” Charlebois said. “I have four kids and we have been through a lot.”