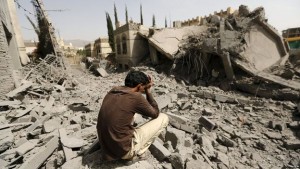 A new UN-brokered humanitarian ceasefire in Yemen has been broken shortly after coming into force. Residents say the Saudi-led coalition carried out air strikes in the capital Sanaa. Clashes have also been reported in the south-western city of Taiz. BBC was there:

The UN Security Council had earlier urged all sides to observe the truce from midnight on Friday (21:00 GMT). More than 3,000 people have been killed since the coalition began air strikes in March to drive back Houthi rebels.

Aid agencies say a blockade on Yemen has worsened the humanitarian crisis after months of conflict. More than 80% of Yemen’s 25 million people now need some form of aid.

Despite the UN-declared ceasefire, fighting resumed in the early hours of Saturday. Witnesses reported the air raids on Sanaa, which is controlled by the Shia Zaidi rebels – or Houthis. One strike targeted a military camp used by the rebels, the Associated Press news agency reported.