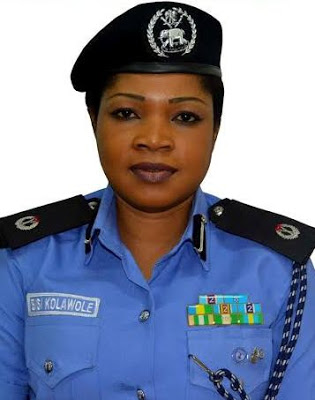 History was made on Friday in the Nigeria Police Force when the Inspector General of Police, IGP Solomon Arase, ratified the appointment of Ag. ACP Olabisi Kolawole as the first Female Police Public Relations Officer, PPRO.

The Ogun State University Law graduate, who is also a graduate of the Nigeria Police Academy, was called to the Nigerian Bar in 2002.

Here are 10 things you probably did not know about the new Force spokesperson:

1. She is a holder of a Masters’ Degree in Police Leadership and Management (PLM) from the University of Leicester, United Kingdom.
2. She has held a vast number of positions within the NPF including Legal Adviser, Administration officer, Intelligence officer and Force Gender Adviser among others.
3. She has served in the following United Nations Missions; in East-Timor 2000, Kosovo 2004, Liberia 2006 and at the DPKO UNHQ, New York 2007.
4. She is a member of the pool of investigators assisting the office of the Prosecutor at the International Criminal Court (ICC) at The Hague in the investigations of Sexual and Gender-Based Violence as international crimes.
5. She has attended several professional Police courses within and outside the country namely;
• Standing Police Capacity Training at the National Police Institute, Bramshil, London, United Kingdom in 2007
• Counter Terrorism Studies at the University of St Andrews, Scotland, United Kingdom in 2008
• POC/Sexual and Gender Based Violence Course at COESPU in Vicenza, Italy in 2013
• Investigating cases of Sexual and Gender-Based Violence as International crimes at the Rule of Law and Anti-Corruption Centre, Doha, Qatar in 2013.
• Protection of Civilian Train of trainers course, National Defence College, Abuja 2014.
• Policy, Strategy and Leadership Course, National Institute of Policy and Strategic Studies (NIPPS), Jos 2014.
• Tactical Leadership and Command Course (TLCC) Police Staff College, Jos 2014.
• Public Relations Course, Public Service Institute, Abuja 2015.
6. She is a member of a number of organisations and associations such as; Nigeria Bar Association (NBA), International Federation of Women Lawyers (FIDA), International Association of Women Police (IAWP), International Association of Chiefs of Police (IACP), United Nations Women Police Network.
7. She was the Deputy Director of the Directorate of Peacekeeping and the Police Force Gender Adviser until her appointment as FPRO.
8. She is happily married with children.
9. She lists reading and traveling as some of her hobbies.
10. She loves Table Tennis.
Here’s wishing Ag. ACP Kolawole a successful tenure.