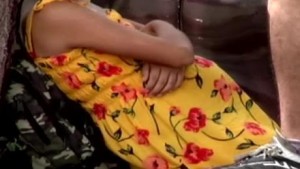 Wonders they say never ceases. An 11 year old Paraguayan girl who was raped by her 42 year old step father known as Gilberto Benitez Zárate, gave birth to a baby girl at a Paraguayan hospital yesterday, August 13, 2015. Gilberto who is married to the girl’s mother, absconded after what he did to the young girl was made pubic.

Yabaleftonline reports that he was later arrested and on interrogation, denied raping the girl and demanded a DNA test. News of her rape gained international attention after she was discovered in May to be pregnant at age 10 and was refused to be granted an abortion by the Paraguyan government

Paraguay has one of the strongest laws against abortion in the world. Amnesty international and some other rights organization had called for the termination of the pregnancy of the little girl because of the psychological trauma she will undergo but the Paraguayan government maintained their stand, saying the 11 year old girl will be given the much needed attention for her to give birth normally.

She gave birth by C-section to a girl that weighed 3.5 kilos (eight pounds). They say she and her daughter are doing very well medically.