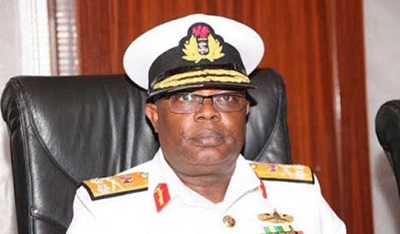 About half the number of ships in the inventory of the Nigerian Navy are presently grounded, the Chief of Naval Staff (CNS), Vice Admiral Ibok Ekwe-Ibas, said.

He said this yesterday while addressing officers and ratings of the Nigerian Navy in Lagos.

The Naval chief was at the Nigerian Navy Ship (NNS) Quora in Lagos on a familiarisation tour.

Vice Admiral Ekwe-Ibas, who noted that the ships are in bad conditions due to carelessness, also warned officers and ratings of the Nigerian Navy to shun oil bunkering while and increase the tempo against crude oil theft on Nigerian waterways.

He added that money realised from the increase in crude oil sales as a result of the drop in bunkering, would be used to fund the military.

“I, the CNS will not involve myself in any illegal act and I will not tolerate it. Nobody will or should use my name to perpetrate any illegal act. The nation is losing a lot through illegal activities and we must stop it”, he told the Naval personnel.

He also advised the officers to disengage themselves from any illegal group they may belong to, warning that anyone caught would be punished accordingly.

“Laxity of the past will no longer be tolerated; the Navy must live up to its constitutional responsibility”, he stressed.

The CNS also urged the officers to change their attitude in the way government’s property are being used.