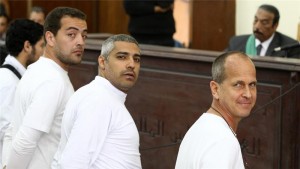 A Cairo court has sentenced three Al Jazeera journalists to three years in jail after finding them guilty of “aiding a terrorist organisation”. Aljazeera was there:

Egyptian Baher Mohamed, Canadian Mohamed Fahmy and Australian Peter Greste were all handed three year jail sentences when the court delivered the verdict on Saturday, sparking worldwide outrage. Mohamed was sentenced to an additional six months for possession of a spent bullet casing.

The journalists had been initially found guilty in June 2014 of aiding a “terrorist organisation”, a reference to the Muslim Brotherhood, which was outlawed in Egypt after the army overthrew President Mohamed Morsi in 2013.

Judge Hassan Farid, in his ruling on Saturday, said he sentenced the men to prison at least partly because they had not registered with the country’s journalist “syndicate”.

He also said the men brought in equipment without security officials’ approval, had broadcast “false news” on Al Jazeera and used a hotel as a broadcasting point without permission. The verdict was immediately condemned by Al Jazeera Media Network’s Acting Director General Dr Mostefa Souag, who said: “Today’s verdict defies logic and common sense. Our colleagues Baher Mohamed and Mohamed Fahmy will now have to return to prison, and Peter Greste is sentenced in absentia.