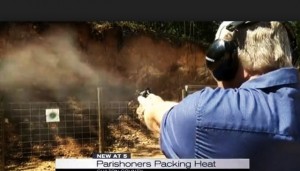 An Alabama church has shocked the nation by converting an unused patch of land on the church grounds into a gun range for parishioners. It appears that the members of Rocky Mount United Methodist Church, in Jemison, unanimously voted to mix religion and guns, “in the name of Jesus Christ,” it has been reported.

“We have had this large hole in the back of our property at the church for quite some time, and we thought it would be neat to start a gun range,” said Pastor Phil Guin. “The hole was primarily filled with kudzu, and had been used at one time to get fill dirt for the new facility that was built on the end of our church building.”

“We started working on the gun range about a year ago with some of the members of our church helping to clean out the hole,” the pastor added. “Not only did we think it would be a good outlet for members of our church to be able to learn more about gun safety, but it would be a good outreach for the community.” According to pastor Guin, a lot of the church’s female members owned or carried firearms but didn’t know how to use them.