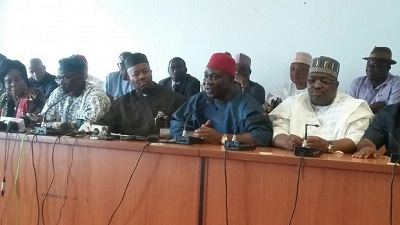 Despite being on recess for six weeks, the Senate has been hit by a fresh round of crisis over a petition written by one George Uboh, against the Chairman of the Economic and Financial Crimes Commission (EFCC), Mr. Ibrahim Lamorde.

The EFCC boss, according to a petition before the Senate, has been accused of diverting N1 trillion said to have been recovered from a former Governor of Bayelsa State, Diepreye Alamieyeseigha; and a former Inspector-General of Police, Tafa Balogun.

Uboh, who is the Chief Executive Officer of Panic Alert Security Systems, had petitioned the Senate through the Senator representing his Delta North Constituency, Peter Nwaoboshi, believed to be an ally of Senate President Bukola Saraki, alleging that Lamorde, in connivance with other EFCC officials, short-changed the Federal Government in the remittance of funds and properties recovered from Alamieyeseigha and Balogun.

The offences alleged against Larmode were said to have been committed when he was the Director of Operations of the EFCC between 2003 and 2007, as well as an acting Chairman of the commission between June 2007 and May 2008, when the former chairman, Nuhu Ribadu, was sent on a compulsory course to the Nigerian Institute of Policy and Strategic Studies, NIPSS, in Kuru, near Jos, Plateau State.

The probe of the EFCC boss by the Senate Committee on Ethics, Privileges and Public Petitions has been scheduled to begin on Wednesday (tomorrow).

But the Peoples Democratic Party Caucus in the Senate, yesterday kicked against the public hearing.
The caucus made its position known in a statement signed by the Senate Minority Leader, Godswill Akpabio, his deputy, Emmanuel Bwacha (Taraba); Minority Whip, Phillip Aduda (FCT) and his deputy, Abiodun Olujimi (Ekiti).

The statement said: “It has come to the notice of the PDP leadership in the Senate that the Senate Committee on Public Petitions would begin a public hearing on Wednesday, 26th of August 2015 and the Committee has invited the Chairman of EFCC to appear before it.

“The PDP leadership in the Senate is not against any committee of the Senate performing its oversight duties and or functions but we feel that this is not the appropriate time to embark on this most important assignment, particularly since this same action was mooted and has failed at previous plenary session.

“We therefore urge the committee to suspend its public hearing on this particular matter until further notice.

“Nigerians need peace at this period of economic challenges precipitated by the falling oil prices and actions that will overheat the polity and generate unnecessary friction between the Executive and the Legislature should be guided”.