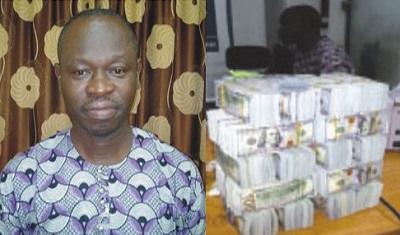 The Economic and Financial Crimes Commission (EFCC) yesterday said it had traced about $2.1million (N413million) seized at the Murtala Muhammed Airport in Lagos to a former Executive Secretary of a federal parastatal.

He is Olufemi Thomas, of the National Health Insurance Scheme, NHIS.

The anti-graft commission said it might be forced to declare him wanted if he does not show up for questioning.

The EFCC said all attempts to locate the former NHIS boss in Lagos and Abuja proved futile.

The Head of Public Affairs, NDLEA, Mitchel Ofoyeju, had in a statement then said Bamidele’s action contravened the money laundering prohibition Act 2011, as amended.

“Preliminary investigation conducted by the Assets and Financial Investigation Directorate of the NDLEA revealed that Ibiteye’s action is in contravention of the money laundering prohibition act 2011 as amended.

“He alleged that the money belongs to one Dr. Martins Olufemi Thomas, a medical practitioner in Lagos. Investigation conducted by the Agency did not link the money to proceeds of narcotics”, the NDLEA said.

Having confirmed that the huge sum of money was not proceeds of narcotics, the NDLEA Chairman, Ahmadu Giade, ordered the suspect and the cash to be handed over to the EFCC for further action.

It was, however, learnt that all attempts by the EFCC to interrogate the suspect had failed.

A top source in the agency said: “The EFCC has finalised a plan to declare the former parastatal’s chief wanted, over a $2.1million money laundering case.

“The anti-graft agency has been on his trail for weeks, since a certain Ibiteye John Bamidele named him as the owner of a $2,198,900 haul, recovered from him by men of the National Drug Law Enforcement Agency, NDLEA.

“Ibiteye was arrested on July 3, 2015 at the Murtala Mohammed Airport in Lagos by the NDLEA and handed over to the EFCC on July 8, for further investigation.

“The suspect, upon interrogation, named as the owner of the money, but all efforts to locate him both in Lagos and his known address in Abuja proved futile”.

The spokesperson for the EFCC, Wilson Uwujaren, confirmed the intensive search for Mr. Thomas, and the plan to declare him wanted if he doesn’t show up.

“We have plans to declare the man wanted. We urge anyone with information on his whereabouts to contact the Commission or the nearest police station”, he said.