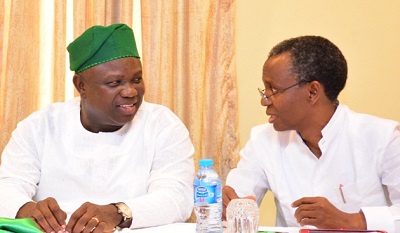 Governor Akinwunmi Ambode of Lagos State has expressed his condolence to his Kaduna State counterpart, Malam Nasir el-Rufai, over the death of his foster father, Malam Yahaya Hamza, in the late hours of Tuesday.
Hamza, who was a renowned educationist and former Permanent Secretary in the Federal Ministry of Education, died after a brief illness.
This was contained in a statement on Thursday by his Chief Press Secretary, Mr. Habib Aruna.
In the statement, Ambode urged el-Rufai to take solace in the fact that the late Hamza lived a fulfilled life especially in the Kaduna State Civil Service, where he served as the Secretary to the State Government as well as Chairman of the Council of the West Africa Examination Council from 1997 to 2000.
“I condole with you and the people of Kaduna State in this trying time. Take solace in the fact that Malam Hamza lived a fulfilled life and you’re a product of that fulfillment.
“On behalf of the good people of Lagos State, accept my heartfelt condolence on this irreparable loss. May his gentle soul rest in peace”, Ambode said.