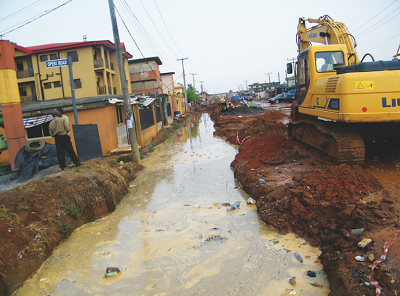 Gov. Akinwunmi Ambode of Lagos State on Wednesday pledged to complete the seven-kilometre Ipaja-Ayobo Road in Alimosho Local Government Area of the state within the next three months.
Ambode made the disclosure during an inspection of some road construction projects in the State.
The administration of former Gov. Babatunde Fashola awarded contract for the reconstruction of the dual-carriage road in May 2011, initially billed to last for 18 months.
Ambode said he decided to inspect the project in order to quickly mobilise the contractor to expedite action so that the project could be completed on time.
According to him, the completion is key to unlocking socio-economic opportunities in the area.
“We have directed the contractor of the project to work day and night and ensure that the project is completed within the next three months.
“In the main time, they will provide palliatives to ease the stress experienced by residents and I plead that you give that maximum cooperation to achieve this.
“Alimosho deserves more than this road because you are the greater part of the state. We will work toward providing a fire station and water works in Alimosho”, he said.
The governor also visited Shomolu Local Government Area to inspect the Igi-Olugbi, Okupe and Deji- Aladejobi Road construction around Ladilak, Bariga, where he expressed displeasure over the slow pace of work.
Mr Olatunji Showole, a representative of HFP Engineering Nig. Ltd. working on the road, said that their major challenge was the relocation of two electricity transformers on the road.
“The mojor challenge is the relocation of services such as two electricity transformers and poles as well as the water services in Igi- Olugbi and Okupe roads.
“But the Power officials and water works officials have been mobilsed to help us with the relocation so that work can continue in earnest.
“Presently, we have finished about 70 per cent of Igi- Ologbi Road, which is the longest relocation to have been completed on Deji-Aladejobi road.
“Between now and January 2016, the three roads will be completed”, he said
Ambode appealed to Shomolu residents to be patient and urged the contractor to ensure speedy work to alleviate the sufferings of residents.
“I am not pleased with the slow pace of work on these roads. We will not accept anything that will make life unbearable for our people.
“The contractor must provide palliative so that motorists can ply these roads before they are completed.
“I used to live in Shomolu and Bariga and I understand the plight of the people. Therefore, this government will ensure comfortable lives for the people”, Ambode said.
The governor also visited the Oshodi market where he urged market men and women to be law abiding by refraining from selling on the road. (NAN)