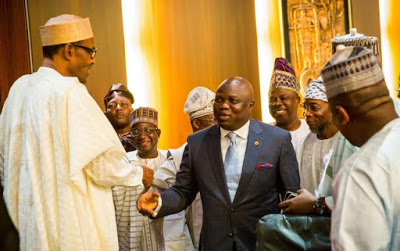 Lagos State Governor, Mr. Akinwunmi Ambode on Tuesday urged President Muhammadu Buhari to disband the Presidential Task force Implementation Committee on the alienation of Federal Government Landed Properties.
In a statement signed by his Chief Press Secretary, Mr. Habib Aruna, the Governor said members of the Task Force are carrying out duties inimical to the interest of the State and Federal Government in Lagos.
The Governor’s call is coming on the heels of several petitions lamenting the nefarious and reprehensible activities of the Presidential Task Force on the alienation of Federal Government Landed Properties in Lagos.
According to him, the Task Force, whose existence and legality was still in doubt have unlawfully embarked on a brazen seizure, take over and appropriation of state and federal government properties.
He said the activities of the Task Force has left in its wake a near total destruction, displacement, stoppage including unprovoked mass harassment, intimidation, molestation and denial of the original owners of the land and properties.
Governor Ambode expressed concern that the activities of the Task Force is coming despite their knowledge of an existence of a consent judgment duly entered into by the same committee and some of the petitioners on one hand and an order of Interlocutory Injunction granted by the High Court of Lagos State, with the restraining orders widely published in newspapers.
The Governor therefore called on President Buhari to immediately disband the Task Force, so as to forestall a breakdown of law and order, stressing that their activities presently constitutes a security risk in the state.
It would be recalled that the committee began its operations during the era of the Jonathan administration.