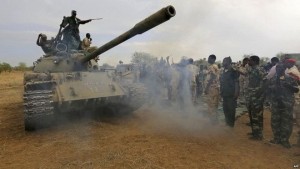 Amnesty International has accused Sudan’s army of committing war crimes by bombing and shelling civilians in its South Kordofan region. More than 374 bombs, including cluster bombs, were dropped in 67 locations between January and April, killing at least 35 people, the human rights group said.

Sudan’s army has not yet commented on the allegations. It has been battling rebels demanding more rights for the region since 2011.

At least 1.4 million people, or a third of South Kordofan’s population, have fled their homes because of the conflict, Amnesty said in a report.

African Union chief mediator Thabo Mbeki is currently in Sudan’s capital, Khartoum, where he is expected to discuss the conflict with government officials, the AFP news agency reports.

“War crimes cannot be allowed to be committed with impunity and a population facing a protracted humanitarian crisis can no longer be ignored by the world,” Amnesty said.