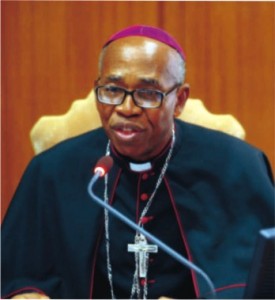 The Imo State Government has been challenged to publish the state accounts so that the citizenry would know the true financial health status of the state.
The Catholic Archbishop of Owerri Ecclesiastical Province, Most Rev. Dr. Anthony J. V. Obinna, who threw the challenge to Governor Rochas Okorocha yesterday, while delivering a sermon at Maria Assumpta Cathedral, Owerri, explained that by so doing, the citizenry will know the true position of things.
“Lack of salary creates room for murmuring. It is necessary that parents receive their salaries and pensions to take care of themselves and their families. When parents do not provide for their families, it will lead to murmuring”, Archbishop Obinna reasoned.
It was the considered opinion of the Archbishop that there was no cogent reason why workers and pensioners should not be paid if the state was financially buoyant.
“If there is money, why is it not being used to pay workers and pensioners? If there is no money, it is important to let people know. Lack of accountability and transparency could lead to murmuring”, Archbishop Obinna said.
The clergyman insisted that since government account was not a personal thing, it should be made public, if the government truly wants to be accountable, as well as wish to quash rumours of misuse of public funds.
“Publish the account so that everybody will know that there is no money. But as long as Nigeria is considered a rich country, as long as oil is still flowing, everybody is looking up to see when the oil money will get to the state”, Obinna said.
The Archbishop then prayed God to touch the hearts of those who are keeping the monies to release it so that things will change for the better.