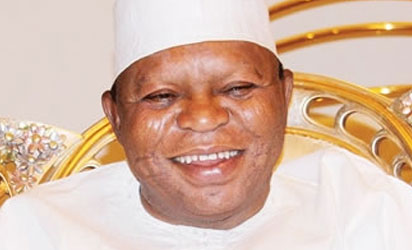 Ex-Governor Abubakar Audu has emerged winner of the governorship primaries of the All Progressives Congress in Kogi State.
In what turned out to be a keenly contested primary election on Saturday in Lokoja, the Kogi State capital, Audu polled 1, 109 votes to beat his closest rival, Alhaji Yahaya Bello, who garnered 703 votes.

Another aspirant, Alhaji Sanusi Abubakar, scored 309 votes, while Hajia Hadiza Ibrahim, the only female among the 28 aspirants, got four votes.

Out of the 3,548 delegates, 3,044 were accredited by the Electoral Panel, while 29 votes were declared invalid.
Declaring the results in the early hours of Sunday, the Chief Returning Officer for the primaries, Gov. Nasir El-Rufai of Kaduna State, appealed to other contestants in the race to accept the result, saying the Electoral Panel did all within its powers to ensure a free and fair primary election.
“What we have seen here today is a reflection of the change we represent. We have ensured the conduct of a free and fair primary election which has reflected the true wishes of our party in the state. I urge you all to embrace the outcome and work for the success of our party in the next governorship election”, he said.
In his response, the APC flag bearer thanked members of the electoral panel for making the election transparent, free and fair.

He called on other aspirants to accept the result in good faith and work with him in harmony in the interest of the party.

“Let us work together in harmony , we have serious task ahead. To unseat an incumbent is not easy but we can do it”, he said.

Audu described the result of the election “as no victor, no vanquished” and praised all the aspirants for their courage and comport before and during the primary election.

The first runner-up, who spoke on behalf of the other aspirants, described the primary election as transparent, free and fair and lauded the members of the electoral panel for their efforts.

He advised Audu to live up to his position as a leader and father, describing APC as a big family.

Bello, also advised the winner to carry all aspirants and stakeholders along, pledging the support of all the other aspirants to ensure APC wins the November 21 governorship poll.