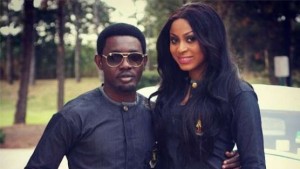 One of the funniest men on the continent, AY Makun, has disclosed where he gets all his jokes from.

In a recent interview the ‘30 Days In Atlanta‘ star said his wife, Mabel Makun gives him inspiration for his jokes.

“You see, to my wife, I am not a comedian. She is even more of the comedian. Because, most of the materials that I use, sometimes, she inspires them,” said AY Makun. “There are times that I even talk about her. We laugh everywhere. And there are ways to make her laugh in bed” he also added.

AY who shut down his MVP Lounge in Lekki in May will be re-opening it soon.

According to sources the award winning actor will re-open the lounge on Independence Day, October 1st.

This time around AY will not be involved in the every day operation of the club.

In his Encomium interview back in May AY said he did not shut down the club because of low patronage.

“It’s not as if MVP has closed down business for good” said AY. “We want to bring in fresh hands to run the place. For us it’s better to close our doors for a while and restrategise than things to get wrong. We need better and able hands to run the lounge” he further said.

In the interview he also said that he is bringing in a professional from the Arabian gulf to work in the lounge.