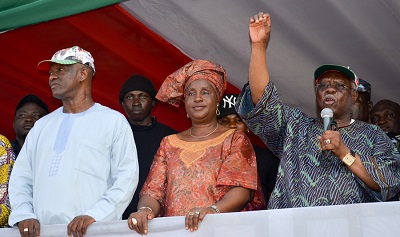 The acting Chairman of the Peoples Democratic Party in Lagos State, Kamaldeen Olorunoje, has accused a former Deputy National Chairman of the party, Chief Bode George, of contributing to the party’s defeat in the state.

Olorunoje made the claim during a press conference in Lagos on Thursday.

According to him, the party’s bright chances in the last general election was hampered due to what he termed imposition of candidates by Mr. George.

Olorunoje, who is the acting chairman of the party following the suspension of the substantive chairman, Capt. Tunji Shelle (retd.), noted that the six House of Representatives seats and eight House of Assembly seats which the party won in the last election were due to the efforts of the candidates and a few party leaders that put some mechanisms in place.

All these people left because of one person, Chief Bode George.

“We all come from Lagos Island. Olorogun-Etti is from Ward E3 while George is from E2. If as a leader you are losing people in your local government, it calls for questioning and Olorogun-Etti was in Chief George’s caucus.

“For Lagos State, his leadership has not yielded any fruit. I respect him a lot but a lot needs to be said. He must be able to embrace democracy. His attitude is due to his military training. For example, he imposes candidates on the party.

“Most of our candidates that won elections were supposed to have been replaced. Had they been replaced, we wouldn’t have won anything. Chief George even told one of them to run for councillorship.

That person is a member of the House of Representatives today”.

On the legality of the suspension of Shelle, Olorunoje said the National Working Committee would have the last say, although the State Executive Committee had the power to suspend him.

He also said the South-West chapter of the party had set up a panel to look into the issue.