Home National News Odd News Bodycam Footage Shows Jailed Woman Pleading With Cops For Her Life Hours...
Facebook
Twitter
WhatsApp
A mother found dead in her jail cell last month can be seen in newly released bodycam footage telling officers she feared for her life before being locked up. 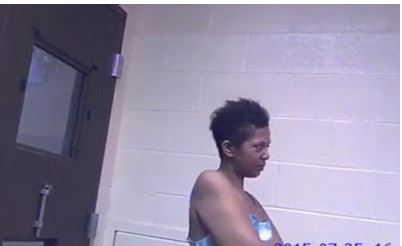 Ralkina Jones, 37, was found dead in Cleveland Heights Jail on July 26 shortly after being arrested for allegedly assaulting her abusive ex-husband.
In footage released today by Cleveland Heights Police, Ms Jones can be seen telling cops ‘I don’t want to die’ 15 hours before she was found unconscious.

Jones’ family is still awaiting the results of an investigation into her July 26 death. The Cuyahoga County Medical Examiner’s Office has yet to release her cause of death, but said an autopsy found no suspicious injuries. 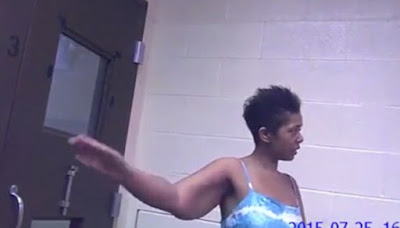 In about a half hour worth of body camera footage released by Cleveland Heights police, Jones is seen discussing her various health issues with police officers at the jail. She expressed concern about her health, and emphasized that she needed to stay in contact with her family and take her prescriptions.

Jones, 37, listed at least five medical conditions for which she was being treated.
Jones told the officers she suffered from postural orthostatic tachycardia syndrome (POTS), which causes lightheadedness and fainting upon standing up. She also said she was taking medication for seizures, ADHD and depression.

Jones also told police about a brain injury she received from abuse from her ex-husband, the man who Jones was accused of assaulting the night of her arrest.

Jones’ sister in an earlier interview also said Jones had a heart murmur.

The officers in the video were cooperative and friendly with Jones. One of them suggested moving her to a cell where she would have access to a phone to speak with her family. But he said her current cell was better situated for jail personnel to monitor her health.

Jones was taken to a doctor a few hours after the recorded conversation. A jail employee found her appearing “lethargic” the evening of July 25. She was evaluated and released within a few hours.

Police say they checked on Jones periodically throughout the night.

The next morning at 7:30 a.m., the jail administrator found Jones unresponsive in the bed of her cell. She was pronounced dead at the scene.

Jones’ family said she was in good health when they visited her in jail the day before she died. They initially expressed frustration toward police, who they said were releasing few details about Jones’ death.

The family later released a statement through the police department saying they “do not fully understand all of the facts and circumstances surrounding her death but look forward to the results of the pending investigations.”