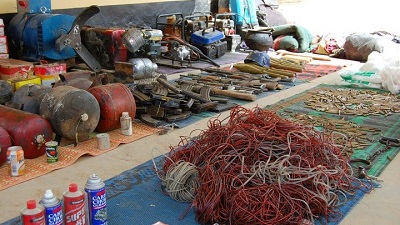 The Nigerian Army on Saturday said Boko Haram terrorists converted an abandoned chemistry laboratory at Dikwa College of Education in Borno State, to a bomb-making factory, before the town was retaken by government troops last week.

The acting Director, Army Public Relations, Col. Sani Usman, said troops from the 7 division of the Nigerian Army in Mai¬duguri discovered the laboratory during a mop-up operation in the area.

Usman said some equipment including a welding machine and a mine detector were found at the makeshift factory.

Also recovered from the operation were four Toyota Hilux pickups.

“The gallant troops are in a very high spirit and more determined to further pursue the fleeing terrorists to all known enclaves and sanctuaries”, Mr. Usman said.