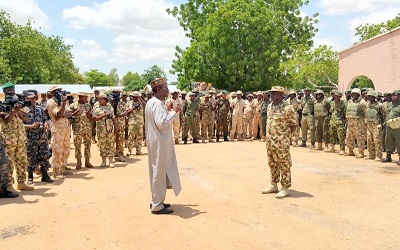 In continuation of his operational visit to the North-East, the National Security Adviser, Major General Babagana Monguno (rtd), along with the Chief of Defence Staff, General AG Olonisakin, Chief of Army Staff, Lieutenant General TY Buratai, Chief of Air Staff, Air Marshal SA Abubakar and the Inspector General of Police, Solomon Arase, visited and addressed troops on Saturday in Damaturu, the Yobe State capital.
A statement issued by the acting spokesperson to the Nigerian Army, Col. Sani Usman, said after paying a courtesy call on the state Governor, Ibrahim Gaidam, the NSA inspected the newly established Army Headquarters Logistics Base, Tactical headquarters of 3 Division and military hardware and equipment.
Monguno, thereafter, addressed troops where he commended their efforts in the war against terrorists and enjoined them to always dedicate themselves to assigned tasks and responsibilities.
He also stressed the need for troops to be alert at all times and adhere to professional ethics of the military profession.
Earlier, Gov. Gaidam commended the political will of the present administration under the leadership of President Muhammadu Buhari in ending the insurgency in his state and the region at large.
The governor was particularly grateful to the cream of military brass the NSA led to the state describing it as the first in the history of the state and the fight against the Boko Haram menace.