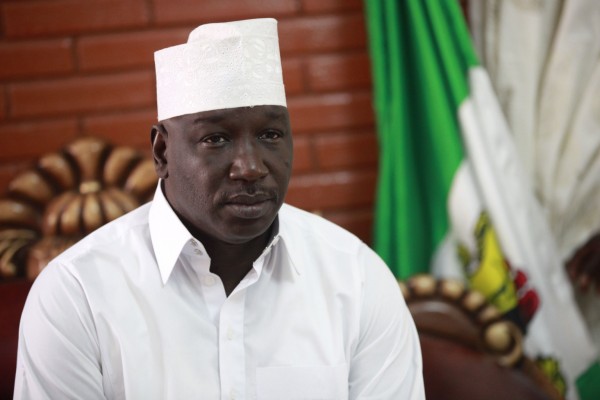 The deputy governor of Borno State, Alhaji Zannah Umar Mustapha, Sunday described reports in the media that Boko Haram is willing to negotiate with the Federal Government as an accepted welcome idea, on the condition that the Islamist militants be fully “committed to laying down their arms for peace” in the North East sub-region of Nigeria.
Mustapha set the conditions for negotiations with the insurgents yesterday in a chat with journalists in Yola, the Adamawa state capital, while returning from the Burnt Bricks of Internally Displaced Persons (IDPs) camp that accommodates over 3, 000 returning Borno indigenes from Cameroon Republic.
The deputy governor, who was accompanied by the Director-General of the National Emergency Management Agency (NEMA), Alhaji Sani Sidi, however, said it is left to the federal government to either accept or reject the pleas for negotiation by Boko Haram.
“I heard and read from the media of the said pleas for negotiations by the insurgents, but sincerely speaking I do not know its source; no authenticity of the speculation. The insurgents are tired and they want true and sincere negotiations, it is left to the Federal Government to accept or reject their advances, depending on the genuineness of their approach to this incessant insane massive killings and bombings in Nigeria including schools, markets and hospitals”, he said.
Mustapha; while addressing the returnees camped in Mubi South, said that 3,488 have so far returned to Nigeria via Mubi – a border town to Cameroon.
According to him, they had been refugees in Cameroon after the Boko Haram attacks in Gambouru and Ngala communities of Borno state.
“The Borno state government will identify with the plights of these returnees”, he assured, adding that the returning refugees would be evacuated from Adamawa after they must have been thoroughly screened by Immigration and Military personnel at the Sahuda entry border post.
Mustapha, meanwhile, said they would be temporarily camped at Fufure and Malkohi designated camps in Adamawa State where they would be searched and screened by security agencies.