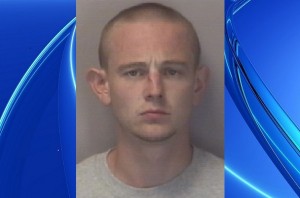 A man was ready to pop the question to his girlfriend when he noticed a robber who was getting violent. Nicholas Anderson of North Carolina, went out with his girlfriend  to a restaurant, where he planned to propose to her. He thought it was the perfect place.

However, a thief ruined the moment for him. Anderson was at the Salsarita’s Mexican restaurant in Hickory, with his girlfriend Deanna Deal and her son Brighton, when the thief entered the restaurant and demanded money.

It was reported that the suspect, later identified as 26-year-old Graham Wilson Kiziah, was given an undisclosed amount of money and he tried to leave the building. Police said that he hit an employee who was trying to lock the door of the restaurant. Anderson saw Kiziah assaulting the employee so he postponed the proposal in order to help the victim.

He grabbed the suspect by his neck and held him down.  David Freeman, an off-duty officer of the Hickory Police Department, noticed the commotion and he sprang into action. Kiziah was arrested on one count of theft and two counts of robbery with a weapon. His bail was set at $175,000.