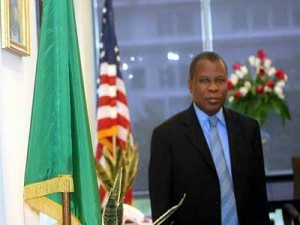 Adefuye, whose tenure as ambassador ends on August 31, 2015 died after suffering from an heart attack in a Washington, DC hospital.

Adefuye was a one time ambassador to Jamaica, with concurrent accreditation to Haiti and Belize, a job he kept from 1987 to 1991. From 1991 to 1994, he served as Deputy High Commissioner at the Nigerian Embassy in London, U.K.,when he was hired by the Commonwealth (formerly the British Commonwealth of Nations) as Deputy Director of Strategic Planning.

After fourteen years with the Commonwealth, Adefuye took a job with the Economic Community of West African States, where he served as an Advisor from 2008 to 2010. He became the Nigerian Ambassador to the United States in 2010.

With his death coming just a few days to the end of his tenure, officials at the Nigerian embassy in the US had already planned a send-forth party for him, scheduled to hoold next week.