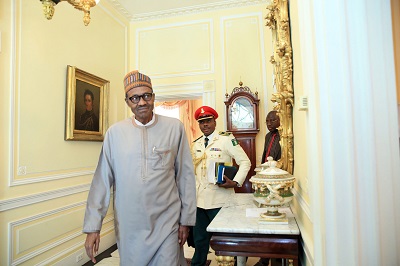 President Muhammadu Buhari has commended the Nigerian military for the increased attack on Boko Haram insurgents. He urged them to maintain the momentum until they are totally defeated and the North-East liberated.

President Buhari commended the military when Permanent Secretary, Ministry of Defence, Alhaji Ismaila Aliyu, and his team, paid the president a visit at the Presidential Villa to brief him on the activities of the ministry and that of Defence Headquarters.

Speaking with State House correspondents after the meeting, Aliyu said that the defence ministry was not involved in the procurement of arms for the nation’s Armed Forces in recent years.

According to him, the president has, therefore directed that the ministry be co-opted into the 13-man investigative committee to probe the procurement of hardware and ammunition for the Armed Forces.

“We briefed Mr. President on the activities of the ministry and Defence Headquarters and he was happy with the operations of the ministry, the operation we are in now is the fight against insurgency. There is substantial progress and achievements to talk about. He has asked us to continue with the momentum and is very willing to support the needs of the Armed Forces,” Aliyu said.

Speaking further, he noted that “the ministry was involved in the procurement of arms sometime ago, but in recent years, the responsibility was shifted to the services”.

Ismaila expressed happiness with the establishment of the committee to probe the past procurement of military hardware, explaining that the president directed during the meeting that the ministry be co-opted into the probe panel.

“Mr. President has asked that the Ministry of Defence be included in that (arms probe) committee.

“The ministry was involved in the procurement in those years, so definitely we have something to present to that committee.

“So, we are part and parcel of that committee. The ministry is very excited that this committee has been formed; because our own concern apart from the administrative and financial support is to make sure that policy thrust is complied with.

“Procurement of relevant equipment according to specification of Nigerian Armed Forces is being complied with and we are very happy with that. At the end of this, we hope to have procurement that will be value-added, cost effective and will meet our needs locally and internationally.”