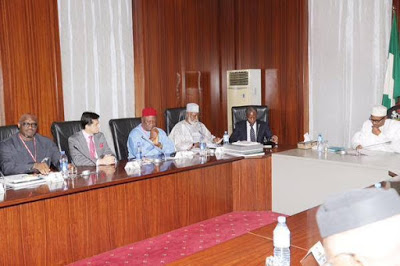 President Muhammadu Buhari on Friday said he welcomed an assurance from the management of the Centenary City Plc that all the original inhabitants of the site in Abuja have been fully compensated.

The president was quoted in a statement by his Senior Special Assistant on Media and Publicity, Garba Shehu, as speaking after being briefed by the Chairman of the company’s board of directors, Gen. Abdulsalami Abubakar (retd), and members of its management team.

Shehu said Buhari praised the Centenary City’s main development partners from the United Arab Emirates for having enough confidence in Nigeria to agree to invest about $18.5bn in the project.

He said President Buhari also welcomed the assertion by Abubakar and his team that the project would create about 250,000 direct jobs in the Federal Capital Territory and about half a million indirect jobs.

The statement said, “The President noted that skills, expertise and vast experience that will be brought into the country to build the Centenary City on the Dubai model, will also be of immense benefit to Nigeria’s overall development”.

The president told the visiting delegation that he looked forward to regular updates on the Centenary City’s development.

Vice President Yemi Osibanjo, who was also present at the briefing, said that the issue of the rights of the original inhabitants of the site acquired for the Centenary City had been of concern to the current administration.

“We are glad that it is being handled”, he said while welcoming the assurance that compensation had been paid to those who will be displaced by the project and that the issue of their relocation was being addressed.

Abubakar and the management of the Centenary City were also said to have told Buhari and Osinbajo that the project would be wholly private-sector driven.