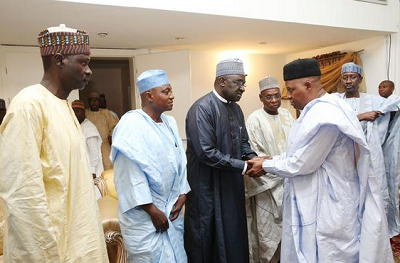 President Muhammadu Buhari on Sunday sent a presidential delegation to Maiduguri, Borno State capital, to commiserate with the government and people of the state on the death of the State Deputy Governor, Alhaji Zannah Umar Mustapha.
According to a statement by his Senior Special Assistant on Media and Publicity, Garba Shehu, the delegation was led by National Security Adviser, Maj.-Gen. Babagana Monguno (rtd.).
The Borno deputy governor died in his sleep in Yola, Adamawa State on Saturday while on official assignment.
Shehu, who is also a member of the delegation, said Buhari, in a tribute read on his behalf by the leader of the delegation, extolled the deceased’s exemplary commitment to excellence and service.
The statement quoted President Buhari as saying that the young, hardworking politician will be greatly missed.
“His was a life of service and excellence as attested to by many people who interacted closely with him”, Buhari said.
The president prayed that Allah will comfort members of Zannah’s family as well as the government and people of Borno State over his sudden death, and grant the late deputy governor peaceful rest.
The Governor of Borno State, Alhaji Kashim Shettima, who received the delegation in the company of the Shehu of Borno, Alhaji Abubakar Ibn-Garbai El-Kanemi, the Shehu Bama, Alhaji Kyari Ibn Umar Ibrahim El-Kanemi and the Shehu of Dikwa, Alhaji Abba Tor-Masta, described the late Zannah as a perfect deputy who was “simply irreplaceable”.
Shettima thanked Mr. Buhari or his sympathy and the solidarity of the Federal Government with the government and people of Borno State as they mourn the deceased.
The governor also expressed the people of Borno’s appreciation of the intensified effort by the military to end the Boko Haram insurgency which, he said, was already yielding positive results.
Other members of the Presidential delegation were the Permanent Secretary, General Services, Office of the Secretary to the Government of the Federation, Alhaji Bukar Goni, and the Senior Special Assistant to the President on House Hold Matters, Mohammed Sarki Abba.