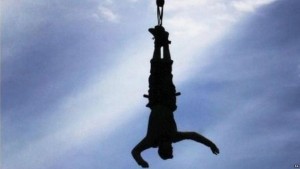 A Dutch teenager has been killed while bungee jumping from a viaduct near Santander in northern Spain. The 17-year-old fell some 40m (130ft) into a dry riverbed below. The teenager had been in a group from the Netherlands and Belgium staying at a nearby surf camp.

Last month, British tourist Kleyo De Abreu died in a bungee jump off a bridge in Granada, southern Spain. She suffered fatal injuries when she hit the wall of the bridge below her. A police spokesman told Dutch media that the latest “ghastly accident” may have been caused by carelessness, although it was unclear what had gone wrong.

The teenager had been taking part in a type of bungee jump known as “puenting”, which involves diving with two cords attached, and then swinging beneath the bridge or viaduct.

Local police chief Joaquin Gonzalez said he had not known that the activity took place on the bridge, adding that it was “extremely risky”. The jump took place from the top of a bridge over the A8 road at Cabezon de la Sal in Cantabria. Mayor Isabel Fernandez told Dutch TV that it was an enormous tragedy. “The girl was so young. We’re ready to help her family as much as we can.”