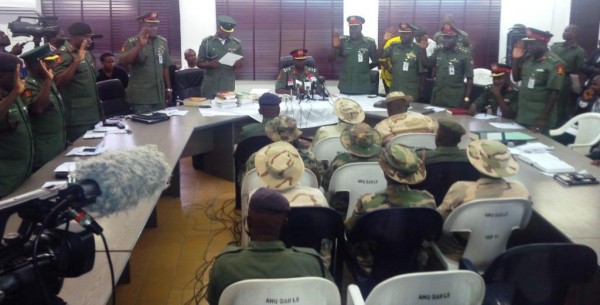 There are strong feelers that the newly appointed Chief of Army Staff, Major General Tukur Buratai has commenced the process of reviewing cases of soldiers dismissed from service as a result of alleged acts of cowardice, insubordination, mutiny and related allegations.

It was learnt that the new Army leadership was revisiting all the cases against military officers and soldiers, which arose as a result of the ongoing counter-insurgency operation in the North-East.
Some of the affected soldiers and officers had either been convicted or still standing trial in the three General Military Court Martials in Kaduna, Lagos and Abuja.

But it was learnt that as part of efforts to review their cases and give some of them a second chance, the COAS had dissolved all the ongoing General Military Courts Martial.

Subsequently, the officers and soldiers involved are expected to report at the Nigerian Defence Academy, Kaduna, for a screening exercise.

The screening committee, which is expected to begin sitting on August 7, would sit for 25 days for a thorough review of the cases involved in the operation.

At the end of the screening exercise, a substantial number of the soldiers, who belong to the Special Forces Battalions that fought in different parts of the North-East, might be given a second chance to continue their careers in the military.

It was further learnt that those who might be lucky enough to benefit from the second chance from the new Army Chief might undergo a short retraining exercise and given the opportunity to rejoin their colleagues in the theatre of operation in the North-East.

The source said, “The new Army Chief has constituted a committee to revisit the cases of all officers and men of the Nigerian Army who are either dismissed or undergoing trial in various General Military Courts Martial for alleged offences committed in the ongoing war against Boko Haram.

“I think the directive involved those dismissed without trial in their various formations, those tried and dismissed and those still facing trial. The cases are general, they involve cases from the military operation in the North East.

“Those to report in the NDA would be given the opportunity of retraining and being brought back into the campaign against insurgency”.

Confirming the development, the Army’s Acting Director, Public Relations, Col. Sani Umar, said the Army was reviewing “all recent disciplinary cases due to wave of litigations by some aggrieved personnel”.

However, he said the directive didn’t mean a total recall of dismissed and deserter soldiers.