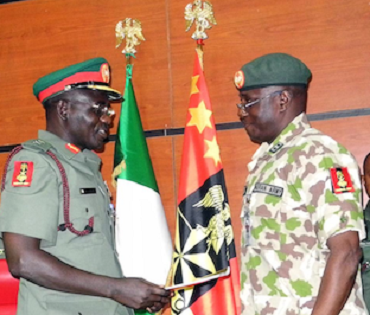 The Chief of Army Staff (COAS), Yusuf Buratai, has tasked his successor at the Multi National Joint Task Force (MNJTF), Ilya Abbah, to ensure the liberation of all territories currently under Boko Haram control.
The Army Chief, who gave the charge while handing over to the new commander in Abuja on Friday, urged him to ensure the rescue of all captives.
According to Buratai, there is need for the new commander to ensure adequate collaboration among the forces in order to achieve set objectives of the multinational force.
“The mandate of MNJTF includes liberation of every held territory in all the joint nations and rescue of captives, including the Chibok girls.
“The task ahead also requires deployment of diplomacy. It is also to conduct stabilisation of territories liberated so that civil authorities can function very well.
“The force is also expected to assist humanitarian organisations in their operations and movement within the area”, he said.
In his response, the new commander of the MNJTF pledged total commitment to the task assigned to him.
“Even if there is language difference between the participating nations, the language of war is the same since we all have common adversary (Boko Haram insurgents).
“With adequate capacity building, logistics support and administration of all the forces, the story will be different”, he said.
Abbah also said his deployment will commence anytime “from today”.
Major General Buratai was appointed as Chief of Army Staff on July 13 by President Muhammadu Buhari from his position as Commander MNJTF, Chad, while Major General Abbah was the Military Secretary (Army), before his recent appointment.
The MNJTF comprises of troops from Nigeria, Cameroun, Chad and Niger Republics and their mandate includes but not restricted to ending cross-border terrorism.