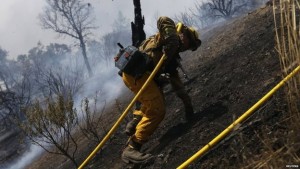 Evacuation orders have been given to 13,000 people in California as firefighters struggle to contain some 20 wildfires. Some 9,000 firefighters worked throughout Monday in steep terrain and rugged conditions, officials said. The biggest blaze – the so-called Rocky fire north of San Francisco – has already consumed more than 101 square miles (262 sq km) of land. BBC was there:

On Monday afternoon the fire jumped a highway that had been containing it. More than 3,000 firefighters were employed to fight that specific blaze. By Tuesday afternoon, cooler weather helped make a buffer between the flames and the 5,500 homes they could destroy.

No additional homes were destroyed on Tuesday, after 24 were burnt down the day before.  “I’ve never seen a fire act like this one,” evacuee Vicki Estrella said.

Four years of drought in the western US have left the landscape tinder dry. Coupled with unseasonably humid conditions, lightning strikes and gusting winds, this has posed a severe challenge for fire fighters and water-dropping aircraft.