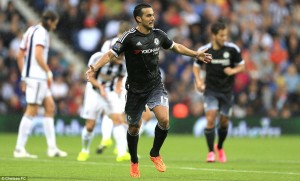 EPL champion, Chelsea pulled off the most unexpected transfer coup of this transfer window yet with the signing of Pedro from Barcelona. As fun as that transfer was for Chelsea fans, it was the most unpleasant news for Manchester United fans who were so sure Pedro will end up at Old Trafford come the end of the summer transfer window.

The news got even more unpleasant for United fans with Pedro’s man of the match performance for Chelsea last weekend against West Brom at the Hawthorns. On the same weekend United forwards refused to turn on the goals, they saw their transfer target put on a show for his new club; scoring a goal, making an assist and bagging the man of the match with a clearly different from the pack performance.

Pedro only had the luxury of two days to get to know his new team mates before making his debut. The debut which many did not expect to much from turned out to be Chelsea’s best attacking display so far this season. This tells a lot about the quality Pedro has brought into the Chelsea attack which had been one of the worse in the league before Sunday.

The match against a stubborn West Brom side saw Hazard and Pedro exude a super cool synergy. They both looked like they’ve been playing together for months. If this two can build on this synergy, then EPL defenders will sure have yet another torrid season against Chelsea’s attack, just as they did last season.

The fact that last Sunday’s win at the Hawthorns was Chelsea’s first in 4 attempts speaks volume of how stubborn West Brom can be in front of their home fans. Again, the fact that Chelsea’s debutant was the man of the match on the day insinuates that Chelsea might just have found the missing piece to them recording yet another successful season.

Pedro was always right in the thick of Chelsea’s most threatening attacks on his debut; he scored one and created another. This is the hallmark of a player who is ready for a successful first season at his new club.

Tomorrow’s match against fellow London side, Crystal Palace at Stamford Bridge is another opportunity for Pedro to prove how good a signing he will be for his new side.