KARMA: What Happened To Lagos Landlord Who Set His Tenant Ablaze Will SHOCK You…

Sola Solomon, a landlord in Lagos who reportedly set his tenant ablaze in Idumota area of the state is dead.

Police source on Wednesday stated that the house owner’s death was occasioned by the injuries he sustained while torching the tenant identified as Abeeb Daraloye.

According to The Punch, trouble began between the pair when they had a disagreement over the use of the toilet in their compound. 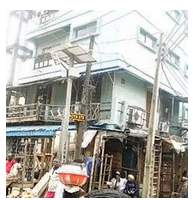 The unforgiving landlord would later pour petrol on Abeeb and torched him with a lighter after which he (Solomon) was alleged to have pushed the victim from the top floor of the three-storey building, killing him in the process.

On his part, Solomon sustained severe injuries after the incident and was reportedly rushed to the Lagos Island General Hospital today, but was rejected before being admitted at the Gbagada General Hospital where he was confirmed dead.

“The landlord is also dead. He died at the hospital in the afternoon. So as it is, the case has been resolved,” a police source told The Punch.

The incident was also confirmed by residents of the area, with an anonymous source stating: “Yes, the man has finally died. He did not survive the injuries. His family members are around. Abeeb’s corpse is also at the Lagos Island General Hospital mortuary, and we don’t know why the police have yet to release it for burial.”

The tenant’s widow, who lamented her husband’s death, explained that her husband was planning to travel overseas, and had promised to take her along with their child before the unfortunate incident.

“Baba became angry and slapped my husband before carrying a plank which he smashed on his head. He said my husband had no right to talk to him that way since he (landlord) was the owner of the house.

“In the night, my husband had finished taking his bath and was cuddling our baby in the room when Baba knocked on our door. I told my husband not to answer the call, but he said there was no problem. He thought the man had come to reconcile with him.

“That was how Baba poured fuel on his face and lit him up. As my husband held him, Baba pushed him down the two-storey house. The whole passage was also on fire before it was put out,” she explained.

Only recently, Dominic Udo, a tenant who reportedly owed his blind landlord rent for three years and six months, set the house ablaze, in the Ajegunle area of Lagos state.