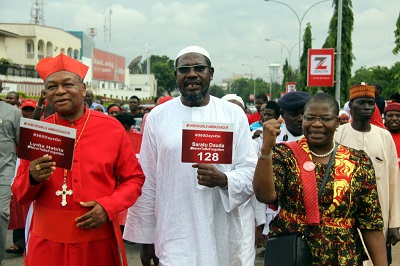 Former Minister of Education and co-convener of the #BringBackOurGirls group, Obi Ezekwesili, on Thursday said that the administration of former President Goodluck Jonathan was a terrible period in the rescue of the Chibok Girls.

She said that the former president’s administration gave false information that demoralized the advocacy of the group and many Nigerians.

Mrs. Ezekwesili, who spoke on Kaakaki, a weekly programme on African Independent Television to mark 500 days since the Chibok girls’ abduction from their school’s hostel in Borno State by Boko Haram, added that the parents of the girls never got any information that was credible from the then government.

She recalled the jubilation in the BBOG camp when former Chief of Defense Staff, Air Chief Alex Badeh (retd.) announced to Nigerians and the rest of the world that government knew where the girls were being held hostage.

This information, she said, turned out to be “decorating information” by the then government.
She said: “You recall that on May 26, 2014 the then Chief of Defense staff said that they had located the girls that the issue was that they needed strategic maneuver in other to rescue them alive.

“We were rejoicing on the day that that information was given. Subsequently other false information was given to us by the same government and that completely demoralized our advocacy because it suddenly seemed as if the desire was not really focused on credibly finding the girls.

“It was not just the BringBackOurGirls that was demoralized during that period. It was the whole world. The whole world could not understand how come the information concerning the girls just seemed to be massaged in all directions.

“At some point we did a mapping of the various information that was coming out of government. We said to ourselves that we were not going to be an anecdotal movement. We were going to simply keep a focus on monitoring the statements of government, the actions of government so that we could analytically say this is what the trend seems to suggest.

“I am saying to you with every sincere bone in me that it was a terrible period”.

She, however, said that the group has renewed hopes that the Chibok girls will be rescued since it met with President Muhammadu Buhari.

Ezekwesili said that the 219 girls who answered the call to be educated will not be forgotten.

“219 young women who answered the call to be educated in other to improve their lot in life as well as enhance our own society cannot be abandoned by their nation and fellow citizen. That therefore keeps us hopeful. We are never going to stop hoping. They cannot be forgotten.

“We see that as the constructive engagement that we desired with the government when this situation first arouse we see it now. That is constructive, that is based on a sense that government owes accountability to citizens”, she added.