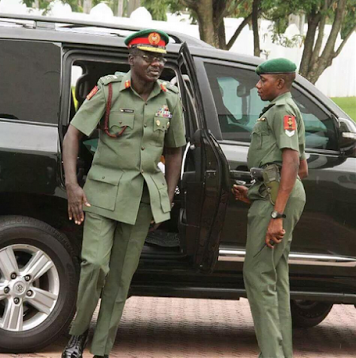 The Chief of Army Staff, Lt-Gen. Tukur Buratai, has solicited for the cooperation of all Borno residents and citizens of Nigeria in ending Boko Haram insurgency by providing credible information on the “hideouts and modus operandi” of the terrorists.

According to him, the sect members have refused peace to reign in the affected states of the sub-region, including Plateau and Kano states.

Speaking on Friday morning in Maiduguri on a special Hausa and Kanuri programme of FM Radio Lafiya (Radio peace), on how to ‘crush and end’ Boko Haram insurgency in the country; Buratai said in strict compliance to the President’s directives on terrorism that has claimed many lives and property, troops of the various Nigerian Army Divisions, including the Multinational Joint Task Force (MNJTF) in the Lake Chad Basin; are to fight the insurgents not only in Sambisa Forest, but continue to pursue and chase them into their hideouts and cells, until peace reigns in Borno state and the Northeast by December.

“Let me take this opportunity of FM Radio Lafiya programme to assure all citizens of Borno state and the entire citizens of this country that Boko Haram, is crushed to the finish for peace, as the insurgents do not want peace to reign in Nigeria and neigbouring countries of Chad, Cameroon and Niger, which formed the MNJTF in fighting this war that has claimed many lives and property.

“What we solicit from Borno citizenry was their full cooperation with troops of the Nigerian Army by providing them with credible information that could lead to the “complete destruction” of Boko Haram hideouts and cells,” Buratai said.

He noted that before the replacement of service chiefs by the President, troops do not pursue insurgents, when they were attacked at any military posts or formations in the North East affected states.

“The morale of our soldiers is now very much high, because of the imported arms and other military hardware are still arriving the shores of the country in fighting this Boko Haram insurgency in Borno state and the North East sub-region,” the Army boss said.