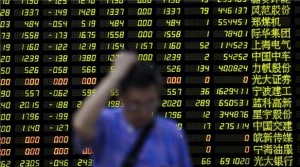 Chinese shares plummeted more than eight percent within an hour of trade on Monday in the face of a global sell-off, despite Beijing authorising its state pension fund to invest in stocks in its latest attempt to shore up markets. Aljazeera reports:

The plunge in China’s equities followed last week’s losses of 11 percent, and hammered stock prices across Asia, as fears grew that a slowdown in China could send the rest of the world into a recession.  The Shanghai Composite Index fell 8.5 percent to close at 3,209.91 points, its biggest one-day loss since an 8.8 percent decline on Feb. 27, 2007. The index is down 38 percent from its June 12 peak.

Meanwhile, Hong Kong’s benchmark Hang Seng Index dropped more than four percent in the first few minutes of trade, the Australian market dived three percent, while Japanese and Taiwanese markets were routed more than two percent. More than $5 trillion has been wiped off the value of global equities markets since China’s shock devaluation of the yuan on August 11 sparked fears the world’s second-largest economy is weaker than thought.

Al Jazeera’s Adrian Brown, reporting from Beijing, said “you don’t need to be an economist to understand that there are some very strange things happening in the Chinese economy”. He said all of the measures taken by the Chinese government, including spending billions on share buy-backs, and Sunday’s announcement that it would invest state pensions in the market to offset the declines, were not working.