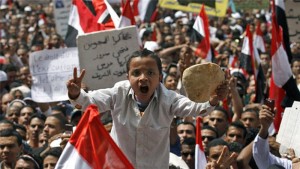 Global food shortages will become three times more likely as a result of climate change according to a report by a joint US-British taskforce, which warned that the international community needs to be ready to respond to potentially dramatic future rises in prices. Aljazeera reports:

Food shortages, market volatility and price spikes are likely to occur at an exponentially higher rate of every 30 years by 2040, said the Taskforce on Extreme Weather and Global Food System Resilience.

With the world’s population set to rise to nine billion by 2050 from 7.3 billion today, food production will need to increase by more than 60 percent and climate-linked market disruptions could lead to civil unrest, the report, published on Friday, said.

“The climate is changing and weather records are being broken all the time,” said David King, the UK foreign minister’s Special Representative for Climate Change. “The risks of an event are growing, and it could be unprecedented in scale and extent.” Globalisation and new technologies have made the world’s food system more efficient but it has also become less resilient to risks, said King.