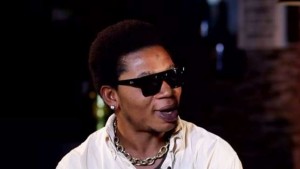 Self-acclaimed best rapper in Nigeria, Vic O, has revealed that he has a girlfriend, a white one as a matter of fact but in his usual odd and humorous manner he claims he is still single.00000000

Speaking to MTV VJ Ehiz on #BaseRealTalk spoke about his relationship status. While answering a fan @sexyjoana who asked if he had a girlfriend, he said “Well, I got one girl. Although she is not with me, she is in the United States. Everybody can come and have me, I’m free. I have a white lady, she’s my girlfriend but I’m single.“

In June it was reported that the rapper was in Lagos to wed his fiancee.

Two years ago, he declared his desire to marry Nigerian actress Genevieve Nnaji.

During the same #BaseRealTalk, Vic O declared he is the best Nigerian rapper.

The viral rapper who is currently on a good run after the release of his viral beef song for Drake and Meek Mill, has revealed his dominance in the Nigerian Hip-Hop scene.

Vic O has declared himself king of Nigerian rap adding, that he is a better rapper than Chocolate City’s M.I, Rugged man, Naeto C, Mode 9 and Eedris Abdulkareem.

“I am not only better than them, I will beat them at the rap battle and they all know about it. I can beat them because I know what I can do” said Vic O.