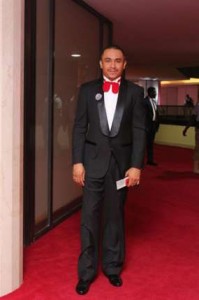 Controversial OAP, Freeze, is known for his love for wristwatches.

He has now gone as far as to call out Jumia, an online retailer for allegedly selling fake wrist watches.

On August 10 he shared a screenshot of a Cartier Strap Leather Wrist Watch sold on Jumia and called it ‘crap’, and labelled it a fake.

“Did Jumia really list this fake piece of crap on their website or is my system acting up? Na wa o! Small time we go dey march against piracy! How hypocritical! One of the major things killing us in this country is our ‘in group bias’. We assume piracy is only bad if it’s done to us. When we support condone or patronize pirated goods it’s fine!” wrote Freeze on Instagram.

Today, August 13, Freeze did the same thing as he continued his tirade against Jumia.
He shared a screenshot of Tag Heuer watches, and called them fake.
Read what he wrote: –

You can do better than these fake TAG watches. I will implore you to take them down, as they would cast a shadow on the authenticity of other items on your website! Let’s all stand together as a formidable force against all forms of piracy and counterfeiting!