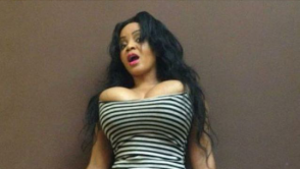 Controversial Nollywood actress and singer, Cossy Orjiakor seems to be on the dating app Tinder, and is looking for love or at least date.

Reports say that a profile belonging to the 31 year old actress was discovered on Tinder.

In her profile she describes herself as “am sweet….a sexy go-getter who love the finest things in life.“

It’s most likely someone someone trying to impersonate the headline grabbing actress, and possibly cash on her fame.

On August 8, Cossy Orjiakor revealed that her cousin was duped of the sum of N20,000 by a Facebook fraudster who impersonated her on the social networking site.

“I am not on Facebook, in fact, my cousin was recently duped by one of them who said that she should bring N20,000 to him in Abuja. Even the movie that I just released, I learnt that the fraudsters told people via the Facebook account to give them money if they want to be featured in the movie. I believe that it is a man that is operating that account and unfortunately, he has a lot of followers” she said.

Speaking further on the illicit atrocities of the fraudster, Cossy said, ‘Someone also reached out to me to inform me that the person is negotiating with men who are interested in having sex with me. I was told that he is asking these men to pay a lot of money because I am a celebrity. It is very annoying. I just hope they would close all accounts that are opened with my name.“