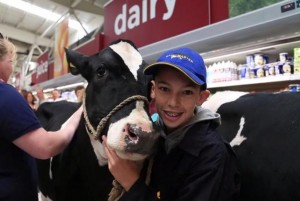 About 70 farmers and two cows descended on a British supermarket to protest the price they are paid for milk. Matthew Weaver, 38, a Stafford, England, farmer and organizer of the protest, brought two of his year-old Holstein heifers to the Asda store in Stafford Sunday and he was accompanied by about 70 farmers and supporters protesting the amount supermarkets pay farmers for milk.

“We needed something that would catch peoples attention and be a bit of fun,” Weaver told the BBC. “Asda were not very happy about it but no one asked us to leave. The cows caused a bit of a spectacle in the aisles and children were crowding round to stroke them,” Weavertold the Express & Star newspaper. “But the animals were very well behaved, they are used to crowds from being at shows, and there were no safety issues.”

Staffordshire Police said officers responded to the store about 12:30 p.m. Sunday on a report of cows in the store and the officers remained on scene “to ensure that the protest remained peaceful and minimal disruption was caused to the general public.””Milk has been devalued by a number of retailers and is a key item being used in an aggressive supermarketprice w ar,” Weaver said. “The four-pint carton [half a gallon] is offered by Asda, Morrisons, Aldi, Lidl and Iceland for 89p [$1.39], cheaper than water, and a slap in the face to farmers.”