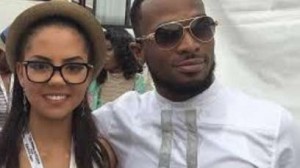 New reports suggest that D’banj is caught up between two women.

That’s normal between two former lovers, but D’banj’s choice of words in his birthday message already have a few people talking.

In the caption of the picture he wrote “Happy Birthday to this very beautiful and extraordinary woman, She’s 1 in a life time..my best friend, my closest and best ally, my beautiful princess the Queen of my heart@presido have a blast my dear. I love you very much babe. Muah!“

Now we are wondering what D’banj will tell his current girlfriend Bonang Matheba.

In June, Adama Indimi was appointed as a Director of Grassroots Mobilizers for the President.; after her appointment D’banj congratulated her on Instagram.

D’banj dated Adama Indimi in 2012, but they split because of pressure from Adama’s family.