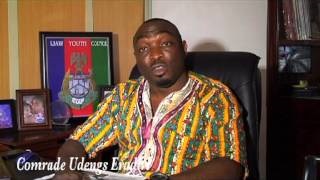 The umbrella body for Ijaw youths, Ijaw Youth Council Worldwide, has said the December terminal date for the Niger Delta amnesty programme is not feasible.
The IYC President, Mr. Udengs Eradiri, made the group’s position known at a news conference at the Izonware headquarters of the council in Yenagoa, the Bayelsa State capital, on Monday.
According to Eradiri, the date was not feasible because there were a lot of issues concerning the amnesty programme that had not been tackled such as the training of some set of ex-militants, rising wave of insecurity in the region and issues of post-amnesty programme.
The IYC boss stated, “The December deadline to terminate the amnesty programme is not feasible.
“The IYC is looking at it and we have already forwarded a document to the Amnesty Coordinator, asking him to look at those who have been trained, those who have not been trained, how do we also capture those boys in the creeks and the insecurity that is going on in the Niger Delta.
“The coordinator, having come out with a holistic view of the process, should be able to advise President Muhammadu Buhari that the deadline is not feasible.
“It is worthy of note that the amnesty programme itself is a security programme. It is as important as the North East. And so you cannot begin to set time lines when the process, the entire programme needs to go through, has not been completed.
“In our own view as the IYC, we do not see December as a feasible termination date for the programme”.
Eradiri said the council would in due course rub minds with the authorities and put the positions at the table for them to see that the terminal date was unrealistic.
He added, “It was not Buhari that fixed December deadline. The date was fixed by the past administration. Between the time they fixed December as termination date, there were approvals that were made in between when agitations started coming from other ethnic nationalities including other youths in the Niger Delta that were not captured.
“The President at that time approved on one occasion 6,000 persons and another occasion 3,000 to benefit from the programme. So, it is not possible to change the rule of a game in the middle of the game. So, all those adjustments will certainly affect the terminal date”.
The IYC leader also backed the ongoing biometric verification of beneficiaries of the amnesty programme, which was ordered by the Amnesty Coordinator, Maj.-Gen. Paul Boroh (retd.), but advised him to check the process again with a view to capturing those who felt they were not carried along in the programme and had resorted to causing mayhem in the region.