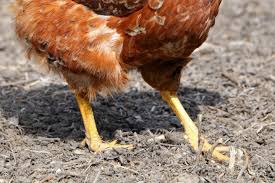 Some folks looking at a disabled young chicken might think: General Tso. Andrea Martin figured out a way to get the hen fitted with a prosthetic leg. A poultry behaviorist who specializes in chicken rehabilitation and rescue, Ms. Martin, who lives with her flock on Berlin Street, said she got the 3-month-old bird, named Cecily, from owners who didn’t realize she had been hatched with a damaged tendon on the right leg. Read more from Telegram:

“It slipped out of position, and the leg becomes useless,” she said. Faced with two options, fitting Cecily with a prosthetic limb at a cost of $2,500, or euthanizing the Leghorn breed chicken, Ms. Martin said for her there really wasn’t a choice. She contacted Cummings School of Veterinary Medicine at Tufts University in Grafton and was told about the procedure, which replaces the damaged leg with a prosthetic made by a three-dimensional printer.

Ms. Martin will pay for the procedure herself. The pioneering surgery on the bird will begin Wednesday at Tufts when Dr. Emi Knafo, a specialist in avian orthopedics, surgery and wound healing, will amputate Cecily’s right leg at the hock – the upper part.

That will follow a CT scan to get a mirror image of the leg to use in creating the plastic prosthetic. Then, after a 10- to 14-day recovery period, the prosthetic, which will be made at Tufts’ Medford campus, will be fitted onto the remaining section of the leg.

Dr. Knafo said this will mark the first time the procedure, which is quite rare in general, has been done at Tufts. The slipped tendon condition, she said, is common in fowl such as chickens, ducks and turkeys, and usually occurs at birth. “The foot tendons contract in an abnormal place,” she said. “It puts them at risk for sores and infections, and the choices were euthanasia, or try to manage it with pain medication. It could be an uncomfortable life. But as a veterinarian, we always try to evaluate and intervene in a positive way.”