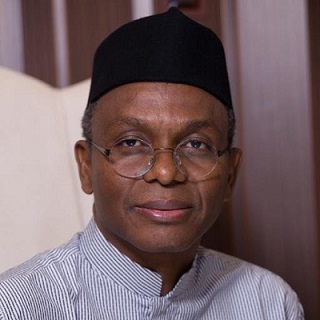 Governor of Kaduna State, Malam Nasir El-Rufai, on Tuesday appointed a new Accountant-General for the state. He is Umar Hassan Waziri.
Governor El-Rufai also retired more permanent secretaries, one of whom is a son of the first Executive Governor of the old Kaduna State, Alhaji Abdulkadir Balarabe Musa.
The Special Assistant to the Governor on Media and Publicity, Mr. Samuel Aruwan, disclosed these in a statement in Kaduna Tuesday.
The statement reads: “The new Accountant-General is a fellow of the Institute of Chartered Accountants of Nigeria (ICAN). He studied Accounting at the Ahmadu Bello University, Zaria, and graduated in 1995.”
“Born in Zaria in 1971, Waziri has worked with Shell Petroleum Development Company as internal auditor. He was most recently running his own accounting firm”.
The retired permanent secretaries, according to the statement are – Adamu Makadi (Local Government), Ibrahim Balarabe Musa (Youth, Sports and Culture) and Ishaku K. Shekari (Accountant-General).