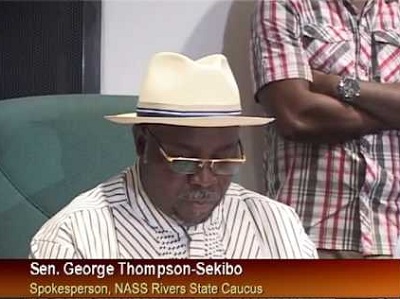 The Rivers State caucus in the National Assembly has petitioned President Muhammadu Buhari over alleged interference by security agencies in the processes of the election petitions tribunal in the state.

The lawmakers, in the petition dated August 25, said that with the way things were going on in the state’s election petitions tribunal, the people’s wish may be ‘subverted’ if care was not taken.

The petition, which was endorsed by 16 senators and members of the House of Representatives from Rivers State, including Senator George Sekibo and Mrs. Betty Apiafi, both of the Peoples Democratic Party, singled out the “State Security Services” and the “Nigerian Army” as security agencies President Buhari should call to order.

The petitioners complained to the president that soldiers and the Department of State Services operatives had allegedly aligned with the All Progressives Congress to appear before the tribunal to testify.

They, therefore, appealed to Mr. Buhari to halt the trend in order not to soil the integrity of his administration and his promise to be fair to all Nigerians.

Part of the petition read, “Your Excellency, as the Commander-in-Chief of the Armed Forces, we bring above actions of your officers to your notice and pray that you caution the Director, SSS, and Chief of Army Staff and indeed all other security agencies to desist from meddling with the electoral process, which presently is before the tribunals.

“We trust on your timely intervention”.

The lawmakers referred Buhari to an earlier July 23 petition, where they raised a similar complaint over the alleged harassment of Independent National Electoral Commission officials and judicial officials by security operatives.

They added that it took the intervention of the Senate before the DSS operatives stopped the reported harassment.

However, the lawmakers lamented that the interferences had resumed with the involvement of soldiers, who now testified before the tribunal.

“It took the intervention of the Senate to make the SSS realise that they were acting ‘ultra vires’ their powers under the National Security Agencies Act Cap. N74.

“They admitted and indeed under the enabling statute, they have no business interfering into electoral matters”, the petitioners said.

The petitioners feared that the ultimate aim of the security agencies in connivance with the APC was to arrive at a conclusion that elections were not held in Rivers State during the March 28 and April 11 general elections.