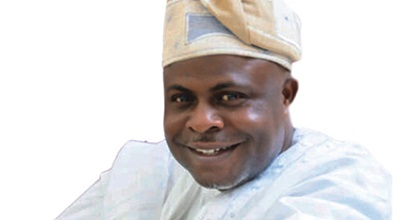 A member of the House of Representatives in the 7th National Assembly, Hon. Bamidele Faparusi, has cautioned Ekiti State Governor, Mr. Ayodele Fayose, over his “relentless attack” on President Muhammadu Buhari.
The All Progressives Congress chieftain instead urged Fayose to face the task of governance and stop dragging the name of Ekiti in the mud.
Faparusi pointed out that the governor’s attack on the president was becoming a recurring decimal, even when it was glaring that governance under him “had suffered a colossal damage and entrenched beggary in Ekiti”.
The Ekiti governor had in a statement on Sunday said he would not be cowed or intimidated into silence on account of his strong stand on national issues.
But Faparusi, in a statement on Monday, expressed dismay that Fayose, who had allegedly taken intimidation, coercion and harassment of the opposition APC as a strategy to win elections in Ekiti, could turn around and accuse Buhari of planning to destabilise his government.
“In the build up to 2015 general elections, Fayose chased all the 26 House of Assembly members away while also running after the State Chairman, Chief Jide Awe, and over 300 influential members of our party over trumped-up charge using the police.
“Even in his own party, those seen not loyal to him were being intimidated or expelled from the party. Does Fayose’s allegation have any strand of believability?” he asked.
The former Reps member pointed out that Fayose, who was talking about intimidation, should know he is the least of Buhari’s problem, adding that “sinner, they say run when no one pursues”.
“Nigerians should know by now that Fayose’s barbaric nature does not represent the value Ekiti people stand for and therefore should not take any of his utterances serious as his illogical and vague criticism of Mr. President is just aimed at wanting to be in the news all the time and, unfortunately, for wrong reasons.
“We will no longer tolerate his continued dragging of Ekiti towering image in the mud. We owe it a collective struggle to ensure that Ekiti keeps its record as the most educated and sophisticated state in Nigeria and we won’t fold our arms and allow an opportunist to derogate the image that had taken years to build”, he said.